Bishop Watterson Catholic High School physical education teacher Carla Hale met with the school’s principal this past Wednesday for the first time since she was wrongly fired earlier this month. Post-meeting, the principal, Marian Hutson, said she supports the decision to dismiss the teacher, who had taught at the school for 19 years. Hale is fighting the outrageous termination and has filed a grievence. Meeting with Hutson is the first step in the grievence process.

Yesterday, Bishop Watterson students from protested the teacher’s firing outside the offices of the Catholic Diocese of Columbus. The Columbus Dispatch reports:

As cars passed the offices on Gay Street, the students held poster-board signs with messages: “ Come together,” “We are all children of God” and “#halestorm,” the Twitter hashtag used to support Hale. Many wore rainbow ribbons or buttons incorporating an equals sign into the Watterson crest.Senior Zac Simmons said he was demonstrating because he wanted his voice to be heard.“She’d always be there for us, and I just want to be there for her,” he said of Hale. 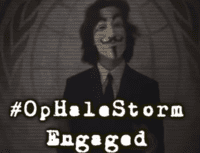 Watch video of the protest, AFTER THE JUMP.

The hacktivist group Anonymous has also become a part of the story. They’ve posted a video in which they urge the Columbus Ohio Diocese to give Hale back her job. Watch the Anonymous video, AFTER THE JUMP.

More than 63,000 have signed the online petition asking to reinstate Hale. You can sign it yourself here.