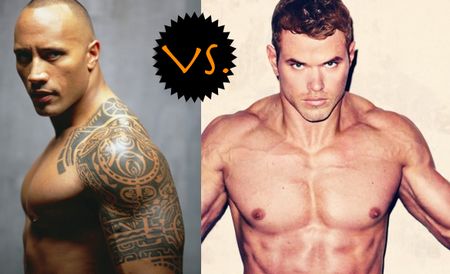 Dwayne 'The Rock' Johnson and Kellan Lutz will both play Hercules

In lieu of a review — this weekend is all about the return of the now twenty-year-old Jurassic Park (in 3D) anyway — how about some hyper-masculine movie news?

Have you heard that there are not one but two HERCULES movies in the works? If it's not quite true that Hollywood is always out of ideas, it is definitely true that Hollywood only likes a few of them at a tine. Was it the success of brawny god/superhero Thor (2010) that convinced them? Was it TV's fleshy Spartacus? Whatever it was, Hollywood would like you to pay to see two sandle-clad Pec-tacular heroes next year. Unfortunately not in the same film so The Rock and The Lutz won't be wrestling around in the sand together in tiny skirts but each headlining their own Hercules pictures.

MORE, plus some movie news AFTER THE JUMP…

The Rock will play the demi-god in Hercules: The Thracian Wars by terrible director Brett Ratner (who recently won a prize from GLAAD for deciding not to be a homophobe anymore. *gag* How about we give prizes to people who are our champions instead? Enough with the grovelling!). The Rock gives good fun screen presence but that title makes it seem like one of those dreadfully serious action films for whom fun is Kryptonite. Meanwhile Kellan Lutz, who has as of yet never exhibited anything like The Rock's screen charisma, will star in Hercules 3D for director Renny Harlin whose career has seen better days but he's capable of a certain over-the-top campiness that might better suit the material (Have you ever seen The Long Kiss Goodnight? Geena Davis sharp shoots while ice skating!)

I prefer my action heroes more slim but Hollywood never has. They're still looking for the Heir to Schwarzenegger & Stallone and the other cartoon-muscled giants of the 1980s. The search has never quite paid off since the hyper-manly hero has been replaced by the Traditional Superhero in the public imagination. Now, even if you have a sickening body like, say, Ryan Reynolds they still feel the need to replace it with fake looking CGI muscles (the worst of Green Lantern's many sins). 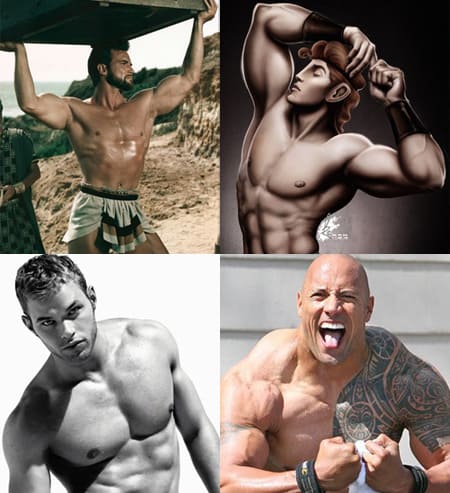 Where was I? Yes, Herculean Strength. Who is your dream demi-god? 1950s Hercules Beefcake Steve Reeves, the Disney Hero who went the distance (drawn by David Kawena), Kellan Lutz, or The Rock? 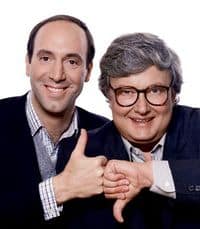 There's a real argument to be made they Roger Ebert and Gene Siskel were the proto movie-bloggers. I'm not religious but I like to think that Siskel and Ebert can now share a cloud in heaven and bicker about the aesthetics of the Pearly Gates. I was devastated a dozen or so years ago when Siskel died and Ebert, too, shall be greatly missed. RIP.

Did you catch the series premiere of Hannibal, yet another variation on the endlessly troublingly popular serial killer genre? This review is spot-on.

And speaking of horror remakes, here's the new Carrie trailer starring Chloe Moretz and the great Julianne Moore (whose greatness does not generally involve the choosing of projects). They're all gonna laugh at it; there is just no replacing Sissy Spacek and her dirty pillows!

Here's a fun variation on "character posters" that ubiquitous marketing trend for genre pictures (and even regular dramas like The Great Gatsby). Snowpiercer, a new sci-fi drama from the great Korean director Bong Joon-ho has released passports for all of its main characters.