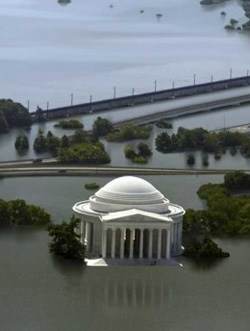 What America will look like under 25 feet of seawater.

NASA to tow asteroid toward Earth for exploration. "The $105 million proposal would begin planning on a two-stage program in which a robotic spacecraft would grab a small asteroid as early as 2019 and drag it back toward Earth, leaving it in a stable position 'just beyond the moon,' a NASA official said."

Smith College wants an end to anti-trans discrimination in admissions.

Nelson Mandela discharged from hospital: "The statement from the office of President Jacob Zuma said there had been 'a sustained and gradual improvement' in the condition of 94-year-old Mandela, who was admitted to a hospital on the night of March 27. 'The former President will now receive home-based high care,' the statement said."

Anti-gay evangelical who called AIDS "a gay cancer" appointed to run Brazil's human Rights and Minority Commission: "Campaigners
in Brazil have staged protests and demonstrations over the decision to
appoint Mr Feliciano. A high-profile campaign has collected 450,000
signatures calling for his resignation."

Previous Post: « Rand Paul Has a Plan to Keep Marriage Debate Going for Another Couple of Decades: VIDEO
Next Post: Movies: How Do You Like Your Hercules? »