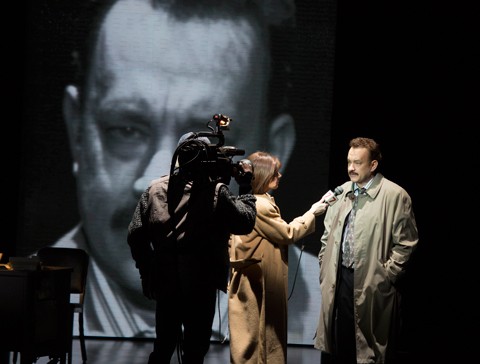 The late Nora Ephron’s new play Lucky
Guy, which opened on Broadway last night at the Broadhurst Theatre, resembles
not so much conventional drama as kinetic, straight-talking journalism. Starring
Tom Hanks as renowned tabloid reporter and columnist Mike McAlary, Ephron’s
play depicts the newspaperman’s rise and fall in the world of city tabloids as if it were a feature profile. It's an insider story with many contributors. 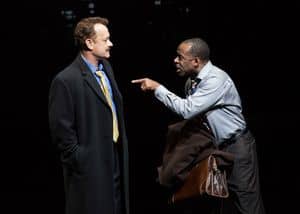 The stalwart writers and editors in the smoky newsrooms of Ephron's 80's and 90's New York vie
for narrative authority as they retell major events in McAlary’s career — though ultimately all the voices on stage add up to
Nora’s own. A veteran of Gotham newsrooms, including a stint at the New York Post, Ephron’s sharp personal
insights are the play’s unmistakable highlights.

Often told in the same exclamatory tones as headlines
splashed across city tabloids, the main events in McAlary’s life are more illustrated
than they are dramatized. Players agree (or disagree) about timelines
and scenes are assembled accordingly, but Ephron’s characters rarely divert
their attention from addressing the audience — storytelling is their business. 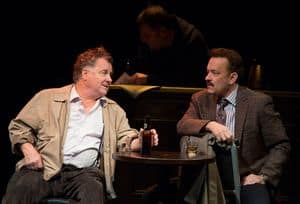 George C. Wolfe (Angels
In America) directs an ensemble cast of fifteen led by Hanks, whose
signature everyman demeanor and accessible charm are put to good use. Hanks takes
the audience into his confidence with ease and brings warmth to the surface of
a bullish, ambitious character. He transforms smoothly from a pavement-pounding
reporter covering the police beat to a weekly columnist blinded at inopportune times
by the size of his byline.

Standouts among the cast include Courtney B. Vance (Fences) as Hap Hairston, and Peter
Gerety (The Lieutenant of Inishmore)
as John Cotter, two of McAlary’s Newsday
editors with whom he had strong bonds. Deirdre Lovejoy is refreshing as two of
the only apparent women in the newsroom boy’s club, while Maura Tierney’s
subdued performance as McAlary’s wife Alice feels like a missed opportunity to lend
the story a more solid emotional anchor.

Yet as events turn to McAlary’s struggle with terminal
illness, it’s difficult to overlook the parallel to Ephron’s own, which ended
last summer while she was continuing work on this play. Between
Hanks' heartfelt performance and words that at moments resonate beyond
the character on stage, it’s an affecting conclusion with a broader context. 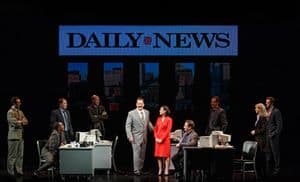 Ultimately, Ephron’s play is an earnest tribute to a
particular heyday of sensational print journalism before the age of Perez
Hilton and TMZ. If her characters aren't easy to get to know, it's because they're essentially beat reporters spinning stories about their lives rather than living them on stage.

Ephron's Cotter boils it down: "You’re born, you die. Everything in between is
subject to interpretation. […] Everything in between is how you tell the story
and who’s telling the story and what they think is important and which order to
put it in and where they’re coming from." As her characters maintain their distance, the 'who' in Lucky Guy rarely ceases to be Nora herself—though there are worse ways to spend an evening than listening to anecdotes and insights from a revered New York legend.