Michael Reagan, the former President's son, is upset about the recent shift in support for marriage equality: 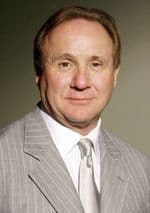 Fox TV, Rush Limbaugh and other talk-show pundits have weighed in, arguing the conservative — and moral — position that sanctifying gay marriage with the grace of the U.S. Constitution is not only wrong but a serious threat to the culture of this country.

But those media outlets often speak to those who are already in the choir. That leaves a lot of other Americans who aren’t hearing anyone preaching the conservative argument on gay marriage.

I don’t expect the GOP to provide any leadership. Republicans are too busy cat-fighting with each other and making sure their presidential choice will be whooped by Hillary Clinton in 2016.

And where in the heck are the churches on the issue of legalizing gay marriage?

Where are the Protestants, Jews and Catholics? Have they lost their tongues? Their hearts and wills? Their institutional you-know-whats?

Where’s the moral outrage? Why aren’t thousands of our pastors, priests and rabbis shouting from their pulpits? Why aren’t they leading their congregations through the streets in mass protest?