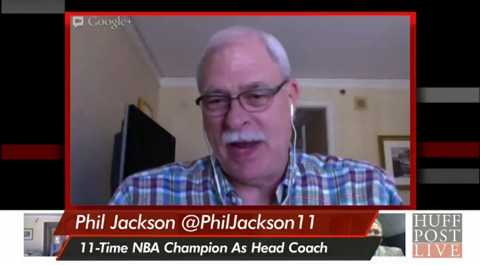 HuffPost Live asked Phil Jackson, who served as head coach of the L.A. Lakers and the Chicago Bulls, and four-time NBA champion Kurt Rambis, who previously served as head coach for the Minnesota Timberwolves, about gay basketball players in the NBA and whether an inclusive attitude is necessary.

Said Jackson: "That's a ridiculous question. I mean, none of us have probably ever seen it in all our careers. There's no inclusiveness to be had. So it's really a strange question… Never run into it in all my career."

Added Rambis:  "There hasn't been a player who was openly gay in the NBA while I've been involved in the NBA whether it was a player or a coach. … it wouldn't surprise me if there was."

Back in 200 Jackson was reprimanded for making a joke about Brokeback Mountain after a particularly physical game against the spurs.

Said Jackson at the time: "We call this a 'Brokeback Mountain' game, because there's so much penetration and kickouts. It was one of those games."

The NBA reacted immediately: "The remarks are in poor taste, and the Lakers have assured us such remarks will not occur in the future."

Jackson said later: "In retrospect, it wasn't really funny. When you take it out of context, it wasn't funny. It was a poor attempt at humor and I deserved to be reprimanded by the NBA. If I've offended any horses, Texans, cowboys or gays, I apologize."