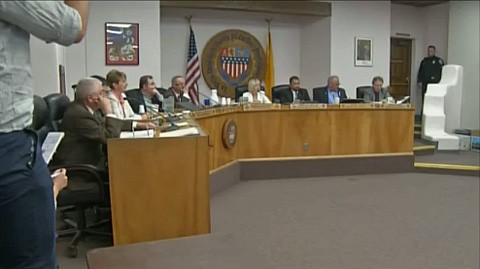 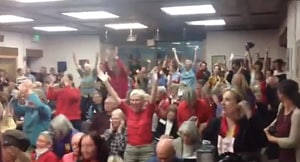 The Santa Fe Fire Department had to bar the doors before the meeting started, leaving many to watch the proceedings from the hallway. Many in attendance wore red to symbolize their support for marriage equality. Others sported yellow stickers, representing the Equality New Mexico organization, or pink felt hearts that said “All Families Matter.” A smaller group held pictures of the Virgin of Guadalupe or wore stickers that said “Life and Family are Sacred.” No public testimony was permitted before the vote…

…The resolution urges both the attorney general and county clerks to recognize that state law already allows the freedom to marry, regardless of gender, Zamora said.

Peter Ives and Bill Dimas, who abstained, both cited their Catholic faith in comments before the roll call and said they do not believe the council has standing to make a policy on the issue. The third “no” came from Councilor Chris Rivera, who said his vote was partly based on believing in “traditional families with traditional values.”
Councilors Ron Trujillo and Carmichael Dominguez, both members of local Roman Catholic parishes, voted in favor of the resolution.

Watch a video of the vote and news reports, AFTER THE JUMP…

The vote comes after last month's declaration by Mayor David Coss that same-sex marriage is legal in the state, an opinion backed by the City Attorney. At that time, Coss announced that the resolution voted on last night would be introduced.

Previous Post: « Some Inspirational Words to Start Your Day: VIDEO
Next Post: Jennifer Lopez on Her New ABC Show About a Gay Family: VIDEO »