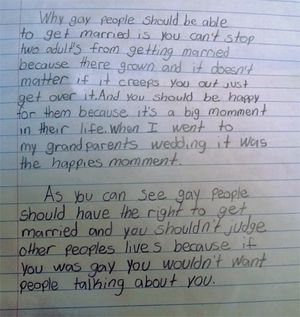 PHOTO OF THE DAY: A 4th grader adorably puts marriage equality haters in their place

Fantastic news in Rhode Island which will become the 10th in the nation to approve marriage equality! Yesterday we reported on the state senator in Nevada who came out during a vote to repeal the state's same-sex marriage ban. Well now we have video evidence for your enjoyment. Also pro-gay rights protesters in Brussels drenched the anti-gay Archbishop of Belgium.

Following the passage of a same-sex marriage bill in France yesterday, there were several violent anti-gay protests. Not just in the capital of Paris but also in outlying cities such as Lyon where 44 protestors were arrested. NOM President Brian Brown told his gay hating French friends that they should continue protesting but should avoid hurting people. 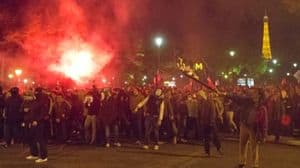 Dr. Paul Cameron, who thinks that being gay is as dangerous as smoking, told Senator Rob Portman to flip flop on his support for marriage equality for his son's sake. Check out this ridiculous video by an anti-gay group that equates being gay with adultery. Republicans in Iowa hate the gays so much that they are trying to cut the salaries of state judges that are pro-equality. And if you are in New York and want to let Jeremy Irons have it, join the group that will be protesting outside of a screening of his latest film.

Check out the latest video from former Drag Race contestant Willam which features a RuPaul impersonation. Ellen DeGeneres has made no secret of the fact that she enjoys Kate McKinnon's impression of her, so it's no surprise that the SNLer broke it out on her show. Now infamous local news anchor AJ Clemente appeared on  Today and explained how his first day went so horrible wrong. And a drag queen on X Factor New Zealand wowed the audience with a rendition of "Proud Mary".

It's amazing that this is even necessary, but a bunch of celebrities have lined up to urge kids to stop snorting condoms. Maybe if you die snorting a condom it's just part of natural selection?