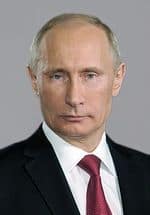 Speaking at Novo-Ogarevo, his residence outside Moscow, Mr Putin said he thought bilateral agreements with other countries on adoption should be changed if they contradicted Russian law.

The president was responding to a suggestion by the head of a regional parliament that Russia should modify its bilateral adoption agreement with France because of the country’s recent approval of gay marriage.

“She is right,” said Mr Putin. “We have to react to what is going on around us. We treat our partners with respect, but we ask that they treat with respect the cultural traditions, the ethic, legal and moral norms of Russia.

“I believe I have the right to introduce changes into such documents. This is a topical question, we need to think about this.”

Previous Post: « The OXD Mirror: New Music For 4.26.13
Next Post: Ellen Hires Males Strippers for the Most Beautiful Woman in the World, Gwyneth Paltrow: VIDEO »