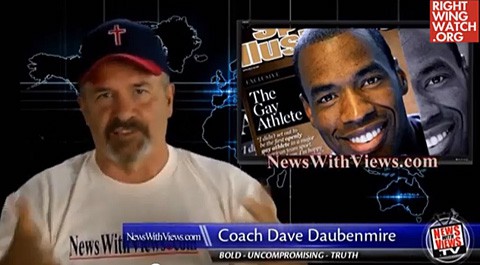 Right-wing blowhard 'Coach Dave' Daubenmire, who made headlines in the 90's and was sued by the ACLU for mixing prayers with his football coaching, went off on Jason Collins this week and the nation's reaction to the story, Right Wing Watch reports:

"It's all part of the queering of America that is going on, folks, and it's happening because men like you and men like me are letting it go on and won't stand up and push back and say anything about it."

"I'm one of the few guys that you'll be able to turn on to the camera and hear him say that homosexuality is an abomination. I don't hate homosexuals. I hate homosexual behavior…and I'm not afraid to say it. … It's all an attempt to destroy the family. That's all it's about. Can you believe the media what they did to this guy when he comes out – the President of the United States calls him and tells him he's proud of him. He's proud of a man who does what? Has buttsex with other men! I know that's rough, but that's what they do."