Legislation to repeal the Defense of Marriage Act will not see introduction before the Supreme Court rules this June, the Washington Blade reports: 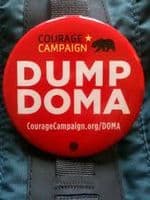 A number of LGBT advocates familiar with the legislation, which has been known as the Respect for Marriage Act, told the Washington Blade its lead sponsors — Rep. Jerrold Nadler (D-N.Y.) in the House and Sen. Dianne Feinstein (D-Calif.) in the Senate — are delaying introduction until after the expected court ruling in June.

Fred Sainz, HRC’s vice president of communications, said his organization supports the decision to postpone introduction of the bill until after a decision is reached in the DOMA case, known as Windsor v. United States.

“The lead sponsors of the RMA have decided to wait until after the court rules in Windsor,” Sainz said. “We support that decision and look forward to continuing to work with them to advance this important legislation.”