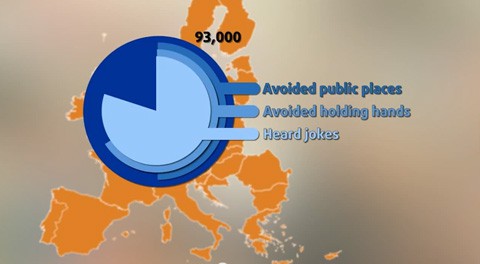 A massive survey of 93,000 Europeans taken by The European Union’s Agency for Fundamental Rights (FRA) and released to coincide with the International Day Against Homophobia, which is today, shows that most LGBT Europeans are living in fear.

Check out the results of the survey in an interactive map.

According to the data collected, LGBT people start facing difficulties early at school, where they regularly experience bullying and harassment. For this reason, anti-bullying policies should be developed and implemented and teachers should be trained about how to better tackle bullying against LGBT students.

FRA research also shows that LGBT people face discrimination in many other walks of life, including work, housing, social services, and in access to goods and services. About half of all respondents had personally felt discriminated against or harassed in the year before the survey because they were LGBT.

Morten Kjaerum: “What is even more worrying is that LGBT people are frequently victims of hate crime and harassment. About a quarter of all respondents said they had been attacked or threatened with violence in the last five years. High levels of under-reporting were also detected: just 22% of the most serious violent incidents against LGBT people in the five year preceding the survey were reported to the police.”

These experiences of hate and discrimination result in LGBT people living in fear: two thirds of the respondents across all EU Member States were scared of holding hands in public with their same-sex partner. For gay and bisexual men this rose to about 75%.

Watch the FRA’s video about the survey and a BBC report, AFTER THE JUMP…