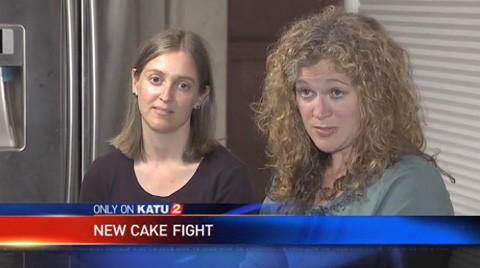 Back in February, Sweet Cakes, a Gresham, Oregon bakery found itself the target of protest after it said it would not bake a cake for a lesbian couple's wedding. The Oregon Labor Bureau is reportedly still investigating.

Now Fleur Cakes, a baker in Mt. Hood, Oregon, has denied a wedding cake request from a couple for the same reason. Erin Hanson and Katie Pugh (pictured above) thought they had found the perfect baker.

Not so, KOMO News reports:

"I mentioned Erin in passing, and said a 'she' in passing too, in the email. A few days later she called back and that was today. And called and verified it was a same-sex wedding," Pugh said.

And that's when Fleur Cakes said it wouldn't bake the cake.

The business is also Regentin's house. She was out of town but spoke to KATU News on the phone.

When asked if she was aware it's illegal to discriminate on the basis of sexual orientation for a business that serves the public, Regentin said: "I believe I have the liberty to live by my principles."