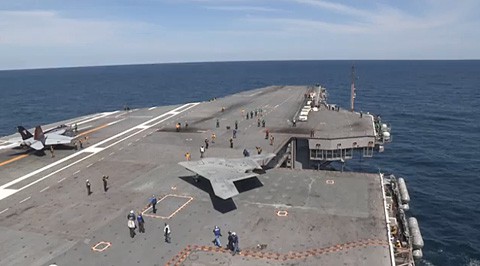 The U.S. Navy is cheering a milestone in drone warfare, Reuters reports:

The bat-winged X-47B stealth drone roared off the USS George H.W. Bush near the coast of Virginia and flew a series of pre-programmed maneuvers around the ship before veering away toward a Naval air station in Maryland where it was scheduled to land.

"This is really a red-letter day. May 14 we all saw history happen" said Rear Admiral Ted Branch, the Atlantic naval air commander. "It's a marker … between naval aviation as we've known it and the future of naval aviation with the launch of the X-47B."

"In a few decades, when autonomous drone planes battle each other in the skies, fire missiles at drone troops and battleships, humanity will look back at this day as the true beginning of total drone warfare…Sooner than we think, the Pentagon will be able to easily and conveniently deploy autonomous fighters, and bombers anywhere in the globe thanks to their aircraft carriers. And then, one day, Skynet will gain self-awareness. Fun times ahead!