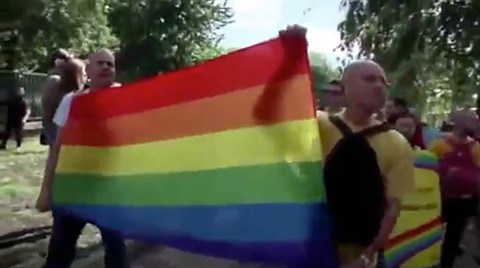 While gay activists marched under police protection in the streets of Kiev, Ukraine today, some 30 people (from both pro- and anti-gay camps) were arrested by police in Moscow as they protested Russia's recently passed ban on "gay propaganda," Reuters is reporting.

Yesterday, a court ruled to cancel Kiev's pride march amidst security concerns. However, police stepped in at the last minute to offer protection to those marching today and arrested 13 people for trying to disrupt the march.

Pro-gay activists in Ukraine are not underestimating the significance of today's march:

"'This event will go down in the history of Ukraine as one of the key developments in the fight for equal human rights,' said Olena Semenova, one of the organizers, expressing gratitude to the police and the authorities for their action."

The assistance and support provided by authorities in Ukraine is in stark contrast to the hard-line anti-gay actions taken by their counterparts in Russia.  This month Moscow officials again refused to allow a gay pride march.

Today's events come on the heels of the recent brutal murder of a gay man in Volgograd, Russia, Vladislav Tornovoi, who was raped, tortured and finally killed because he was gay.

The Russian government has been ratcheting up its anti-gay rhetoric as of late. Russia's Children's Rights Commissioner Pavel Astakhov has stated that the Russian Federation will now consider altering its adoption policies with France, following that nation's legalization of same-sex marriage.  This announcement has echoed calls by President Vladimir Putin to end adoption of Russian children by foreign gay couples and, more broadly, by nations who allow same-sex marriage.  Yet Putin insists Russia does not discriminate against gays.  Today's events in addition to accounts from Russian activists seem to tell a different story.

Check out some videos of the march in Ukraine and the arrests in Russia, AFTER THE JUMP…

Previous Post: « Naomi Watts as Princess Diana: First Look
Next Post: New Ride Puts You 400 Feet in the Air on a Swing: VIDEO »