Pittsburgh Steelers rookie quarterback Landry Jones spoke with Outsports reporter Cyd Zeigler at the NFL Players Association (NFLPA) Rookie Premiere.   He discussed his Christian beliefs and the novel perspective that they shouldn't interfere with having a gay player on his team.  Asked about how Christian and gay players would mesh on the field, Jones had this to say: 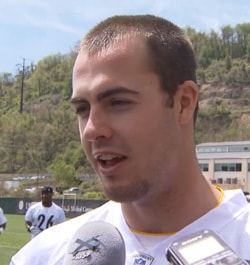 "There's not a conflict," Jones said. "People are people and God tells us to love everybody. And so that's what I do."

"Now, do I condone what they're doing? No, I don't think it's right," he continued.

Jones recalls other NFL players, the notorious Tim Tebow in particular, with his strong Christian background.  During their interview, Zeigler noticed a Biblical passage from Philippians printed on Jones' hand.  But Jones also respects the gay community, and gay players:

Jones' words echo the recent outspoken support of former NFL player Kurt Warner and recently dismissed-and-resigned punter Chris Kluwe.  And though Landry is hesitant to fully support the gay community, Zeigler suggests that his may be the halfway-there perspective we need to embrace in the sports world:

If we're going to open sports for everyone, Jones' willingness to put his personal feelings aside and treat people equally is the kind of perspective we must be willing to hear. Just as we want men like Jones to accept us, we must accept them.