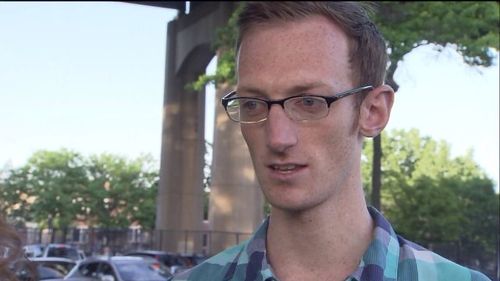 Over the weekend I reported on the 9th recent anti-gay hate crime in New York City in recent weeks. Nineteen-year-old Manel Riquelme has been charged with a hate crime and aggravated harassment in the attack on Eugene Lovendusky, a member of the activist group Queer Rising.

NY1 reports: "Investigators say Lovendusky and his boyfriend were walking on 42nd Street near Eighth Avenue around 3 a.m. Saturday when a group of teenagers, including Manuel Riquelme, 19, began shouting anti-gay slurs…Riquelme allegedly hit Lovendusky in the face and knocked off the victim's glasses, according to police. After the alleged incident, Lovendusky called police and officers found the teens in a pizzeria at West 40th Street and Ninth Avenue."

Said Lovendusky to PIX 11: "They started yelling  'faggot' at us, and I spun on my heels because I am worth defending… and I got punched. Then my friend stepped up trying to defend and he was told ‘Do you want to be next faggot?’  But by then I had my phone out and the cops came right away. No matter how big or small one feels the assault may be, report it.  The more reporting the more public conversation, the more awareness."

Watch Lovendusky speak with WPIX (apologies for autoplay), AFTER THE JUMP…

Previous Post: « Adam Lambert and a Pack of Shirtless ‘Thieves’ Debut a New Song at Vienna’s Life Ball: VIDEO
Next Post: Idaho Sheriff May Drop Boy Scouts Charter Because ‘Sodomy is Against the Law’ »