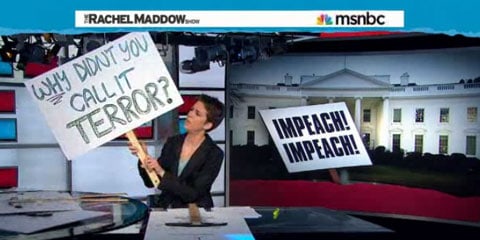 Rachel Maddow last night took an incredible look at how Republicans have been trying to "impeach Obama for something, anything" since the first day he was in office, ticking off the list of reasons that have been offered up by various lawmakers, yet haven't stuck.

"Republicans and the Right love talking about impeaching President Obama even when they're not sure exactly why. It's almost like an involuntary tic. They sneeze and a little 'impeach Obama' just squeezes out without them meaning to."

Benghazi is just the latest, and it's Senator James Inhofe (R-OK) who's leading the charge.

Maddow dissects the GOP arguments, and the outrage.

Previous Post: « NBC Cancels ‘The New Normal’ After One Season
Next Post: Lawmaker Cries on House Floor, Upset Gays Might Be Able to Marry: ‘My Heart Breaks for Minnesota’ »