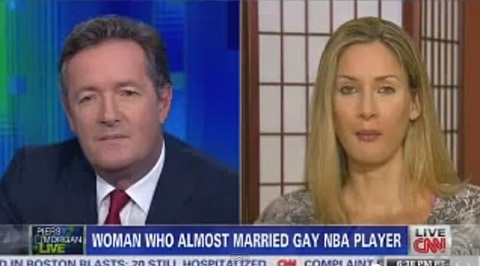 Last night Piers Morgan interviewed Jason Collins' ex-girlfriend of eight years Carolyn Moos (a former WNBA player), about her reaction to the news that he is gay.

Said Moos: "He actually called this past weekend and we spoke a couple of times on Monday, so it's really fresh in my mind. It's going to be a process, absolutely, and it just takes a lot of perspective, and a lot of understanding, and a lot of open conversation."

Asked Morgan: "Did he apologize to you?"

Replied Moos: "I think he's in the process of taking ownership of the here and now which is actually coming out. That can be very – I assume – overwhelming."