Pennsylvania Rep. Darryl Metcalfe yesterday reintroduced a bill that would amend the state Constitution to define marriage as between a man and a woman. 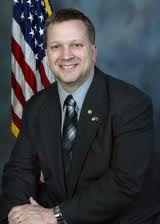 Said Metcalfe in a statement:

Pennsylvania does not need to wait for the United States Supreme Court to rule on what natural law already declares as self-evident … Marriage is a sacred bond that can only be fulfilled by one man and one woman, as established by God. Final passage of my legislation will allow state lawmakers to exercise their rightful responsibility and obligation to uphold the rule of law and the will of the people.

In the last session, the bill had 40 supporters, but today, according to a rep from Brian Sims’ office, there are only 27. And this is the first time it’s been introduced with zero Democratic backers. To top it off, his bill’s lackluster show of support comes on the heels of yesterday’s announcement that a record number of legislators on both sides of the fence sponsor legislation that ban discrimination against LGBT people in the workplace and housing and public accommodations.