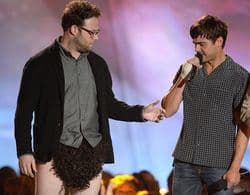 Seth Rogen, who appears with Zac Efron in the upcoming film Townies, has a man crush on his co-star, People reports.

"Zac Efron is incredibly handsome. He's the sexiest [expletive] on the planet! I did a scene with him, and we're both shirtless, and it was a very humbling experience. I marveled at the fact that we're literally the same species. I'm hairier than he is, so I win at that."

Previous Post: « A Closer Look at the Chosen and the Snubbed in This Year’s Tony Award Nominations
Next Post: Marriage Equality Polls Well in Oregon: 49 Percent Favor, 42 Oppose »