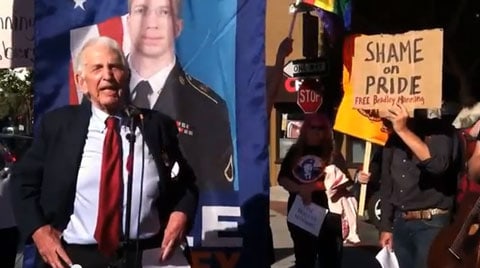 Angered by the decision, protesters demanded parade organizers reinstate Manning with the honor. "We're here today because a big mistake was made by the Board of Directors of Gay Pride," Pentagon Papers leaker Daniel Ellsberg, who would have marched in the parade on Manning's behalf, told the assembled crowd Monday. "They were talking about a mistake that was one of the most honorable things the Gay Pride people have probably done for a long time."

Williams pointed to the danger Manning placed fellow members of the military in as justification for her decision. "Even the hint of support for actions which placed in harms way the lives of our men and women in uniform–and countless others, military and civilian alike–will not be tolerated by the leadership of San Francisco Pride," she said.

Manning is currently in custody awaiting the outcome of his pending court martial.

Ellsberg plans on marching in this year's parade with a banner supporting Manning. "If that will not be tolerated by the leadership, I guess I'm in for a little intolerance," he said.

Watch Ellsberg speak, AFTER THE JUMP…