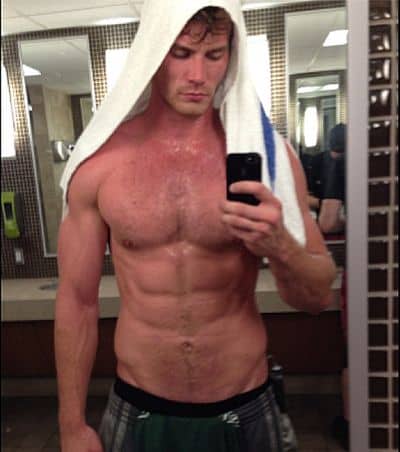 PHOTO OF THE DAY: Baby Daddy's Derek Theler has a treat for everyone.

President Obama pushes the Illinois House of Representatives to pass a marriage equality bill in the final days to do so. Tune in tomorrow. Also the California Senate has approved a bill that would strip the Boy Scouts of their tax exempt status due to their discriminatory anti-gay policies.

Fresh off his critically acclaimed portrayal of Liberace, Michael Douglas has opened up about the closeted members of Hollywood. Speaking of biopics about gay singers, Tom Hardy might be a possibility to play Elton John. Check out the first trailer for the star-studded "Machete Kills", and Grumpy Cat will be coming to a theater near you!

It turns out that the two bakeries in Oregon who refused to bake cakes for gay weddings don't have a problem with all 'sinners', just those of the gay variety. With yesterday's news that Michele Bachmann will not seek re-election, Rachel Maddow takes a look at some of her best (or worst) moments. Terrible news in Nigeria which has passed a law that will imprison gays for up to 14 years. Also a gay gun control advocate and New York City Mayor Michael Bloomberg were both sent letters that contained ricin.

If you are even a moderate Instagram user, you probably have seen some of these dudes and prancing is really the best way to stay in shape.

Previous Post: « Illinois House Adjourns Without Voting on Marriage Equality and One Day Left in Session
Next Post: Will Obama Speak Out About Gay Rights in Africa? »