Will Ethiopia consider imposing the death penalty for homosexuality? Bikya News seems to think so: 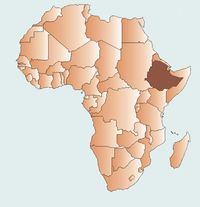 An anti-gay organization that held a recent workshop on lesbian, gay, bisexual and transgender (LGBT) issues in Ethiopia is reporting that the death penalty against gay people in Ethiopia may be on the horizon.

The workshop reportedly looked with the social ‘evils’ and ‘disastrous’ effects of homosexuality in Ethiopia, and was led by United for Life Ethiopia, a Western Evangelical Christian organization with local representation.

Government officials, religious leaders, leading heath professionals, charities and members of the public attended the event at the Bethel Teaching Hospital in Addis Ababa, last week. In the workshop police alleged ‘homosexual family members and neighbors’ have sexually abused 117 boys last year. It comes on the heels of much antagonism toward the LGBT community in Ethiopia.

At the conclusion of the workshop, the EICAH representative stated that the council is ‘making progress’ in convincing the government to be stricter on homosexuality and introduce the death penalty to punish ‘such acts’.

The ECIAH representative added that prospects for capital punishment being legislated against gays ‘seems promising’.

The United for Life Ethiopia (ULE), led by Dr Seyoum Antonios, sponsored the event as well as ECIAH.

ULE is a Western Evangelical organization that receives funding in the UK and US and offers to ‘cure’ gayness as well as campaigning aggressively against LGBT people in the country.