Earlier this week we reported that Australia had a new prime minister, Kevin Rudd, who recently endorsed marriage equality. Now Rudd has announced he wants to grant same-sex couples the freedom to marry, the WSJ reports: 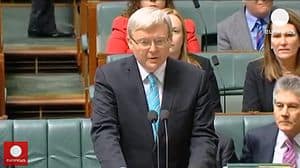 Mr. Rudd said he wants a conscience vote for lawmakers on the issue, or to allow the nation to decide via a referendum.

"I am now the first prime minister of Australia who is a fully signed-up supporter of marriage equality," Mr. Rudd told reporters. "I would like to see this done. This causes so many people unnecessary angst out in Australia in the gay and lesbian community," he said.

The maneuver by Mr. Rudd, who has presented himself as a Churchgoing family man, is an attempt to broaden his appeal with voters beyond his traditional support base and sets up a clash with center-right leader, Tony Abbott.

Mr. Rudd was sworn in Thursday as prime minister after defeating rival Julia Gillard—an opponent of gay marriage—in a ballot that returned him to the party leadership three years after being toppled in an internal coup led by Ms. Gillard.

Advocates are happy for Rudd's support but concerned that a referendum would inspire a fear campaign:

Marriage equality advocates are thrilled the Mr Rudd has spoken about the issue in his first major media event, but do not support his call for a public vote.
Mr Croome said a process of a referendum would be "unnecessarily expensive".
He also said while he believed the majority of Australians would vote for marriage equality, he was concerned was about the process.

"We have consistently opposed a national plebiscite or referendum on marriage equality for a number of reasons," Mr Croome said.
"It could potentially be deeply polarising, becoming a platform for fear-mongering against the gay and lesbian community, and we think that our politicians are elected to make these kinds of decisions, rather than hand-balling them back to the voters. It could be quite destructive… particularly for young, same-sex attracted people coming to terms with their sexuality. They don't need to see the kind of fear and hate campaigns that I feel would inevitably come out during a referendum."

Previous Post: « Anderson Cooper Tells Cher He Grew Up Thinking She Was His Sister: VIDEO
Next Post: The OXD Mirror: New Music For 6.28.13 »