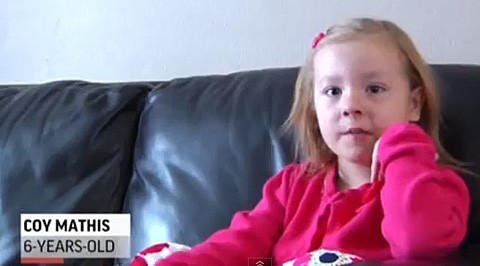 In February, we reported on first-grader Coy Mathis, who was barred from using the girls' bathroom at her Colorado school because she is transgender. She has male genitalia but has identified as a girl since 18 months and lived as a girl since age 4.

Now, transgender advocates are hailing a ruling by the state's civil rights division that could have a dramatic impact on future cases, the NYT reports:

In a sharply worded ruling, the division concluded that the Fountain-Fort Carson School District needlessly created a situation in which the student, Coy Mathis, would be subject to harassment when it barred her from the girls’ bathroom even though she clearly identified as female.

Telling Coy “that she must disregard her identity while performing one of the most essential human functions constitutes severe and pervasive treatment, and creates an environment that is objectively and subjectively hostile, intimidating or offensive,” Steven Chavez, the division director, wrote in the decision.

More on the ruling:

It noted that while Coy’s birth certificate stated she was male — an argument made by the school district — more recent medical and legal documents identified her as female.

It was clear, the state said, that Coy had completely integrated into society as a girl — wearing girls’ clothing, standing in the girls’ line at school and choosing to play with girls.

But the state’s ruling went even further, saying that evolving research on transgender development showed that “compartmentalizing a child as a boy or a girl solely based on their visible anatomy, is a simplistic approach to a difficult and complex issue.”

Depriving Coy of the acceptance that students need to succeed in school, Mr. Chavez wrote, “creates a barrier where none should exist, and entirely disregards the charging party’s gender identity.”

A news report on Coy Mathis, AFTER THE JUMP…