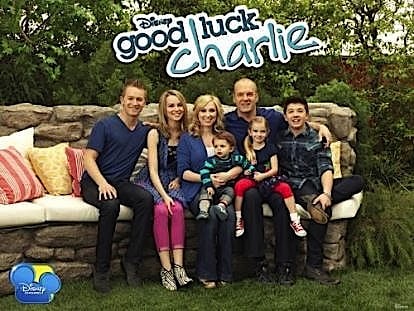 The Disney Channel will be passing a historic milestone early next year with the introduction of the first LGBT characters to ever appear on the channel. TV Guide reports that a 2014 episode of Good Luck Charlie will include a lesbian couple, the network's first out characters in a series:

In the storyline, parents Amy and Bob Duncan (Leigh-Allyn Baker and Eric Allan Kramer) set up a playdate for preschooler Charlie (Mia Talerico) and one of her new friends. When the kid arrives, the Duncans learn that Charlie's pal has two moms. That's fine, but the potential new friendship is put to the test as one mom chats with Amy, and the other is stuck listening to Bob's dull stories.

The playdate is actually the secondary story in the episode, as much of the action will center on Teddy (Bridgit Mendler) and her best friend Ivy, as Ivy prepares to head off to college.

But Disney Channel understands the groundbreaking nature of featuring a same-sex couple on one of its sitcoms and took extra care in crafting the episode. "This particular storyline was developed under the consultancy of child development experts and community advisors," a Disney Channel spokesperson says. "Like all Disney Channel programming, it was developed to be relevant to kids and families around the world and to reflect themes of diversity and inclusiveness.

Producers are currently casting the couple, with production set for next week. Because the episode will be a part of Good Luck Charlie's final season, the characters are only expected to appear in this one episode. Regardless, this is a huge step forward for LGBT visibility in children's programming.