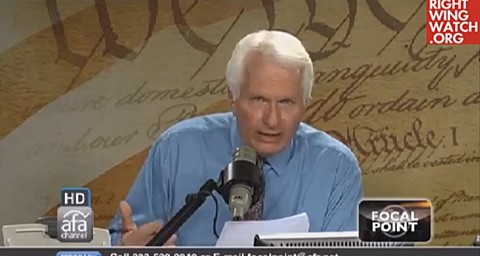 Anything short of upholding DOMA, anything short of upholding Prop 8 in California will be a setback for the rule of law, it will be a setback for a constitutional form of government; in fact you can just eliminate the first three words of the Constitution: “We the people.” That will be utterly meaningless if the Supreme Court does not uphold Prop 8 and does not uphold DOMA, period. Anything short of that and the American people have been robbed of the capacity and the right and the authority to be a self-governing people.

If the states were to do it, the thirty states that have marriage amendments say, ‘fine, the Supreme Court has issued its ruling, we’re going to ignore it, they have exceeded their authority, we have no obligation. In fact, if we recognize their ruling, we give credence to it, then we are violating the Constitution because the Constitution gives them no authority to do that to us so we have compounded their unconstitutional act with an unconstitutional act of our own.