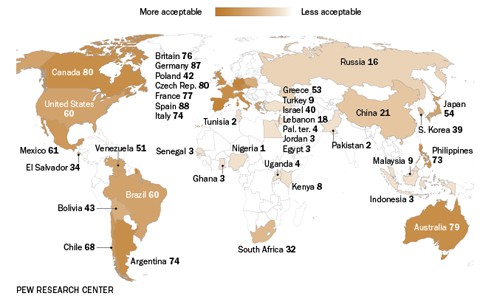 A new study from Pew Research surveys the public on whether society should accept homosexuality:

The survey of publics in 39 countries finds broad acceptance of homosexuality in North America, the European Union, and much of Latin America, but equally widespread rejection in predominantly Muslim nations and in Africa, as well as in parts of Asia and in Russia. Opinion about the acceptability of homosexuality is divided in Israel, Poland and Bolivia.

Attitudes about homosexuality have been fairly stable in recent years, except in South Korea, the United States and Canada, where the percentage saying homosexuality should be accepted by society has grown by at least ten percentage points since 2007.

The survey also finds that acceptance of homosexuality is particularly widespread in countries where religion is less central in people’s lives. These are also among the richest countries in the world. In contrast, in poorer countries with high levels of religiosity, few believe homosexuality should be accepted by society.