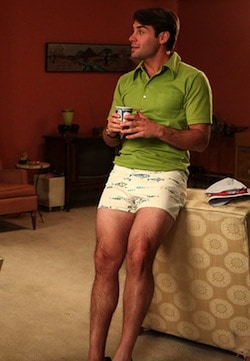 The sixth season of AMC’s Mad Men has been steeped in even more mystery than usual. In addition to whatever Don Draper is hiding (we mean his true identity, not what’s in his pants), audiences are also debating the likelihood his current wife may share the same fate as murdered actress Sharon Tate.

But the real focus isn’t on the Drapers (or even Peggy, Roger or Joan). With the acclaimed series just three episodes from ending its penultimate season, folks are surprisingly obsessed with a character we met only this season.

The name on everyone’s lips is Bob Benson.

The eager accounts man, portrayed by James Wolk (Political Animals, Happy Endings), has captivated Mad Men fanatics. If the notoriously meticulous show’s Facebook posts are any indication, they’re on the right track. How those suspicions play out, however, is still a topic for debate.

One prevailing theory suggests Benson is secretly a gay man.

Other viewers are not convinced.

What do you think will happen with Bob Benson?

Bobby Hankinson is a Brooklyn-based writer and digital strategist. His days are spent thinking about digital engagement for non-profits, while his nights are spent shimmying to Spotify, reading comic books and watching the best (and, let's be honest, worst) TV has to offer.