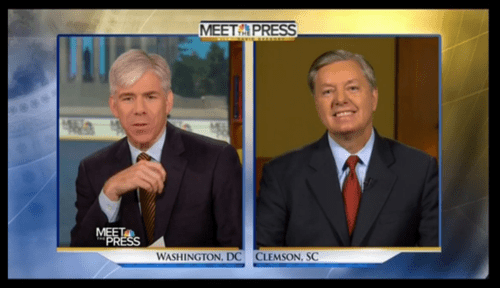 South Carolina Senator Lindsey Graham is the latest in an ever-lengthening string of GOP spokespeople concerned about the state of their party, a string which includes Rush Limbaugh and Bill O'Reilly. Graham appeared on NBC's Meet the Press on Sunday and spoke with David Gregory about the state of the 2016 presidential race. Mediaite reports:

“If we don’t pass immigration reform,” Graham said, “if we don’t get it off the table in a reasonable, practical way, it doesn’t matter who you run in 2016. We’re in a demographic death spiral as a party, and the only way to get back in the good graces with the Hispanic community, in my view, is to pass comprehensive immigration reform. If you don’t do that, it really doesn’t matter who run in my view.”

The GOP is not, however, dead in the water. Graham still believes a Republican candidate has a chance after Obama's two-term tenure.

“I would suggest a guy like Jeb Bush would have a really good chance in 2016,” Graham said. “A former governor or a governor. But you got Marco, you got Paul Ryan. The good news is we have a deep bench, and after eight years of President Obama’s economic policies—and, quite frankly foreign policy—people are going to be looking around.”

Though certain members of the GOP maintain that the Republican party upholds traditional Constitutional values (think: Michele Bachmann), whatever that may mean, the importance of those values appear to be dwindling. What statements like Graham's lay bare is the necessity for change and evolution, particularly in capturing the support of minority populations, a feat which Mitt Romney was unable to pull off. We will have to wait until 2016 to find out if the GOP can make such changes.