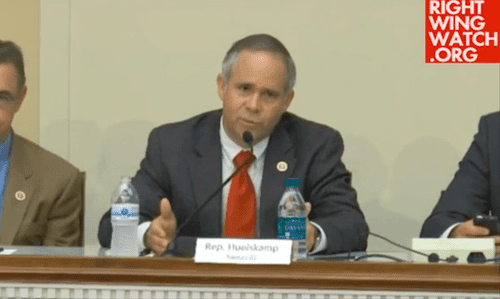 Representative Tim Huelskamp (R-Kansas), who has already announced his plan to reintroduce the Federal Marriage Amendment later this week, has been making the media rounds to express his strong disagreement with the Supreme Court's marriage equality rulings. Earlier today, Huelskamp appeared on a Christian radio program to discuss how gays and the left are "turning government against the church." Right Wing Watch reports:

The congressman also added that the left is bent on "ramming their views down the throats of Americans."

Earlier this week, Huelskamp appeared at a Heritage Foundation summit to discuss the real reason behind his crusade: the children.

"Decades of social science research and centuries of American history has shown that every child deserves a mom and a dad. With this ruling they have further redefined marriage and I think children will be hurt."

Watch (and listen), AFTER THE JUMP…