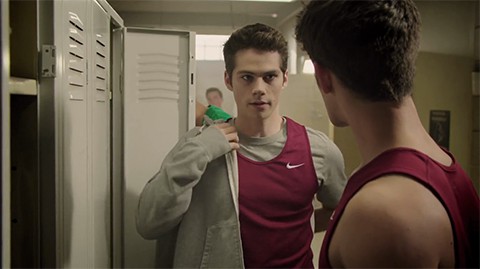 In last night's episode of Teen Wolf, a distinct note of bicuriosity lingered in the air as character Stiles freaked out about being a virgin in a town where virgins have a shorter life expectancy than most. Previously, show creator Jeff Davis spoke to E! News, reacting to fans' (many of them young girls) desire to see Stiles and another character, Derek, together:

"We've certainly made some hints to the possibility of Stiles being bisexual. As to the psychology of why 'girls like boys who like boys,' I haven't asked enough questions or heard enough to really understand the psychology behind it. I know of certain relationships such Holmes and Watson that might have a kernel of truth to them within the actual writing, but then others I'm less sure about. Like what's called 'Wincest,' a romantic relationship between the Winchester brothers on Supernatural."

I also have a feeling this GIF might be making the rounds today.