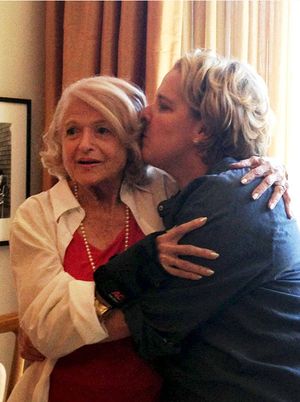 PHOTO OF THE DAY: Edie Windsor is victorious!

It was a massive day for equality at the Supreme Court where the Justices struck down DOMA and ruled that Prop 8 proponents had no standing effectively legalizing same-sex marriage in California! Ari Waldman has a comprehensive break down about the death of DOMA and what the "no standing" ruling means.

With SCOTUS effectively vacating the appeal of Prop 8's supporters, same-sex marriages are reportedly ready to resume in the Golden State in a matter of weeks and Governor Jerry Brown wants marriage licenses to be issued ASAP!

It was obviously a day of huge celebration for gay rights activists nationwide, although there is certainly still work to be done. Edie Windsor, quickly becoming the face of this historic day, spoke in New York following the rulings. Prop 8's plaintiffs and attorneys held a joyous press conference on the steps of the Court, one that was interrupted by a congratulatory call from the President. Obama also released a statement while aboard Air Force One that praised both of the Court's rulings. And Former President Bill Clinton along with possible 2016 candidate Hilary were equally pleased.

It was a bad day to be a homophobe as the anti-gay blowhards were foaming at the mouth of the pro-equality decisions. The American Family Association is super sad for the Christians today. NOM's Brian Brown is crying about some kind of "stench" and Maggie Gallagher still refuses to believe that gays can love each other.

Celebrities and activists alike nearly broke Twitter with a crush of elated reactions. Also now that gays can get married in California, Kristen Bell is ready to marry Dax Shepard.