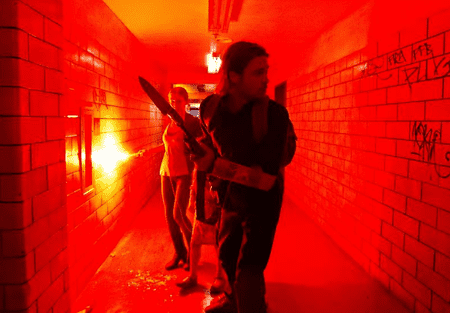 You in Danger, Brad!

If the world can be powered by screams, as Monsters, Inc and its new prequel MONSTERS UNIVERSITY claim, then we've surely got a surplus to run on for decades to come. The horror genre in all its shapes, sizes and moods (including children's film) has rarely, if ever, been more popular. Brad Pitt warns a surely soon-to-be zombified family in WORLD WAR Z who have holed up in their apartment that "movement is life". They should run! But where are they supposed to run exactly? Zombies, werewolves, vampires, serial killers, and monsters are everywhere on film and television. Even outside the horror genre, dystopias (Hunger Games anyone?) or apocalypse awaits; at some point every superhero and action movie now blows its (budget) load on laying waste to New York City and/or its counterparts across the Globe. If pop culture is mass catharsis for our intangible mood, than we are all terrified children and in need of much therapy.

Apologies for the armchair psychology but this must surely be why we've made our zombies crush-worthy (Warm Bodies just arrived from Netflix as I was typing this, no joke, – Hiiii, Nic Hoult!), our vampires twinkly, and our monsters cuddly.

I mean look at him! Cuddly monsters and Brad-chasing Zombies AFTER THE JUMP… 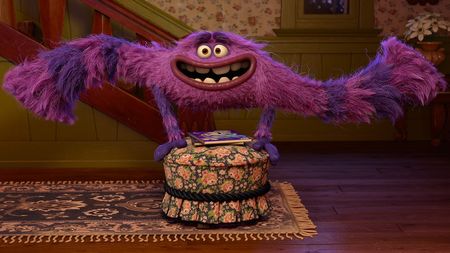 MONSTERS UNIVERSITY
A hefty percentage of the plot to the prequel to Pixar's 2001 classic Monsters, Inc springs from an indisputable fact about the hero that the hero just can't accept: Mike (Billy Crystal), that wisecracking green eyeball with arms and legs, is just not scary. For all of Pixar's much lauded gift for and focus on "story story story" this basic truth at the heart of the film is never satisfactorily dealt with and only sort of wished away, in a dreams affirming way. The foundation itself is shaky but very few of the monsters are scary so we'll let it slide.

After a brief prologue in which Mike first becomes fascinated with Monsters, Inc on a grade-school field trip, we catch up with him again as he starts college. In the past Pixar has excelled at making movies for kids that are also resonant for adults. The concept here suggests a goldmine of the same since college is for adults-in-training. Sadly, apart from a few mediocre fraternity house jokes and one amusing bit about continuing education (one of the monsters is much older than Mike and Sully and seeking a career change), the setting is wasted since the college itself, the title character for chrissakes, has no personality. This could just have easily been called Monsters High or Monsters Elementary for how generic the jokes are. Think: intimidating teachers, shushing librarians, and school "clubs". 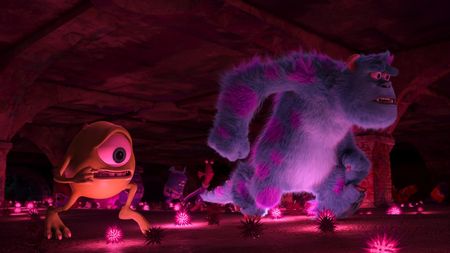 For the first time ever in a Pixar feature (outside of maybe the Cars franchise) the visuals are also disappointing. There was precious little variety in the monster designs ('how many eyes do you want on this one, Lasseter?') despite a late-film "message" that everyone is unique and our uniqueness is our strength. Instead of an interesting story that might hold deeper meanings — we should expect that from Pixar right? — we get a contest plot without stakes since the outcome is assured and/or irrelevant by the small fact of this being a prequel. Instead of clever story beats we get potential video game levels (Mike and Sully and their friends must pass five tests (in different settings) to stay in school — many of them involving dodging objects or escaping other monsters.

In the absence of a good story and resonant emotional journey you busy yourself with engaging miniature details: the way one teacher's horns wrapped so tightly against her head that they looked like hair buns, the creepy sounds of the Dean's tiny crustacean legs on a giant dragon's body, an unexpectedly spooky/funny shot of the least scary monster of all motionless with every eye open by a child's bed. Despite a few smiles, Monsters University is a sad reminder that the once ambitious Pixar's days of glorious original programming are behind them. They're content to lean back into former glories now. 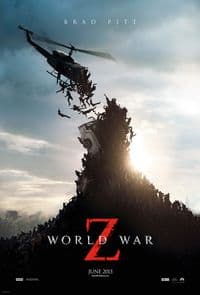 WORLD WAR Z
Things got a little better in World War Z despite its troubled production history. It's a worthier film for trying much harder and succeeding (in parts). It starts off exceptionally well, buying the film a lot of goodwill (which it will need), with a genuinely terrifying setpiece: an eruption of city chaos during a normal day's drive for Gerry (Brad Pitt) and his wife and kids. "Rabid" people are suddenly flinging themselves at fellow citizens, trucks and cars are careening through the streets with no sense of speed limits or lanes and soon the entire city is burning. As it turns out Gerry is good in a crisis, a professional even. After this nail-biting intro, the government (or what remains of it) demands he resume his previous UN funded dangerous activities and find patient zero and/or a cure for this apocalyptic plague.

World War Z is based on an acclaimed novel of the same name that was told from an unusual multi-character multi-city diary-of-events perspective. Occassionally one gets a sense of a truly original movie, a more faithful adaptation, peaking through but since they've chucked all perspectives but one (Gerry's) to the side, it's a much simpler movie than it seems to want to be, given its ambitions, visually and geographically. "Movement is life" and Gerry logs a lot of hair raising frequent flyer miles, with and without zombie passengers.

Despite at least two fantastic setpieces and the genuinely unsettling visual of dead people piling up like ant mobs to scale seemingly impervious walls, World War Z has three problems it can't resolve. First, they've forgotten to make Gerry a character so it's only Brad Pitt, Globe Trotting Philanthropist/Hero, you're seeing and without substantial supporting roles to augment him, he's less than usual. Second, the story just sort of runs out of steam, tossing up its hands via voiceover in a 'maybe we'll make a sequel?' shrug. But most damningly it just never fully answers the loud question of "WHY ANOTHER ZOMBIE MOVIE?"

The lack of variety in today's cinema may be the scariest monster in our collective closet. If we all bought a ticket to Before Midnight, Frances Ha or Mud again (the three best movies of the summer) each time a new superhero or monster movie opened, Hollywood would have to change its ways. But first we'll have to. I'm part of the problem: I never remember until a new blockbuster or sequel or reboot is over that it's just like seeing the last one again. Variety is an illusion!

To quote Buffy the Vampire Slayer, an early precursor to today's monster mania but wise enough to continually mock its perpetual apocalypse…

"the earth is doomed".