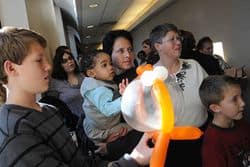 The plaintiffs include 10 couples and a widow, including three couples from Allegheny County. The nominal lead plaintiffs are Deb and Susan Whitewood, of Bridgeville, who are joined as litigants by their two daughters, Abbey, 16, and Katie, 14. Also among the plaintiffs in the lawsuit are Fredia Hurdle, 49, and Lynn Hurdle, 43, of Crafton Heights; and Dawn Plummer, 36, and Diana Polson, 37, of Point Breeze.

The ACLU and the Philadelphia law firm of Hangley Aronchick Segal Pudlin & Schiller are filing the complaint in U.S. District Court in Harrisburg in an effort to have the state's Defense of Marriage Act declared unconstitutional. That act defines marriage as between a man and a woman, and bars Pennsylvania from recognizing same sex marriages entered into in other states.

“What we’re looking for is the validation from the legal system that we are equal in our marriage as anyone else,” said Susan Whitewood, 49, in an interview before a planned news conference to announce the suit at the Pennsylvania Capitol in Harrisburg.

The legalization of same-sex marriage has primarily come through the political process, with lawmakers and voters approving it in six states in just the past year. But earlier victories were achieved through state courts, including in Massachusetts and Iowa. The A.C.L.U. acknowledged that it was bringing suit in Pennsylvania because overturning the state’s gay marriage ban in the Republican-controlled legislature is a near-term impossibility.

The ACLU expects a trial in Pennsylvania. It also says it plans to file suit shortly in North Carolina and Virginia.