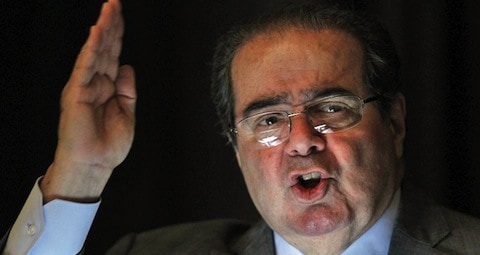 This weekend in Snowmass, CO Justice Antonin Scalia spoke to a gathering of the Utah State Bar Association. The "strict originalist" bemoaned judicial activism and his colleagues treating the Constitution as a "living document" in a speech titled "Mullahs of the West: Judges as Moral Arbiters." His argument was that elected officials, not unelected judges, should be the ones to legislate society's moral views.

Justice Scalia wasted no time in invoking Godwin's Law, opening his speech with the claim that judges interpreting the law in ways that reflected "the spirit of the age" in 1930's Germany was what led to the rise of the Nazis and, ultimately, the holocaust. He also pointed out that Supreme Court interpretation of the Constitution wasn't necessary at the turn of the century in response to the women's suffrage movement. However, he conveniently omitted that it was due to the Supreme Court intervention that schools were desegregated and interracial marriages were made legal.

Scalia received a standing ovation for his speech, the attendees apparently unaware that the first person to invoke Godwin's Law loses the argument.

Previous Post: « It’s A Boy! The Duchess Of Cambridge Gives Birth To A Son: VIDEO
Next Post: Steve Grand Sets The Record Straight On His Image, His Past, And The Road Ahead »