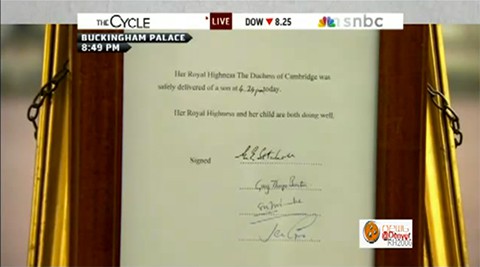 The Duchess of Cambridge has given birth to a son weighing in at eight pounds six ounces. The birth of Queen Elizabeth II's first great-grandson was announced first via press release and then, as anticipated, on a proclamation set forth on a gilded easel in the courtyard of Buckingham Palace, the same easel first used to announce the birth of the baby's father, Prince William, in 1982. The New York Times reports:

“Her Royal Highness the Duchess of Cambridge was safely delivered of a son at 4:24 today,” the statement proclaimed, nearly five hours after the actual birth. “Her royal highness and the child are both doing well.”

Prince Charles, said he and his wife, Camilla, the Duchess of Cornwall, were "overjoyed" at the good news. A spokesman for the Queen and Duke of Edinburgh added that they were "delighted."

The Duchess and the young Prince of Cambridge are expected to stay in hospital overnight. We may not get our first glimpse of the new prince until tomorrow morning. Congratulations to the happy parents!