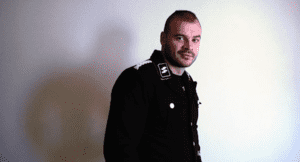 We told you the other day about the despicable Russian hate group Okkupay Pedofilyay that was using social media to lure gay teens to be tortured for being "pedophiles." Vocativ.com has additional information on the group and its leader Maxim Martsinkevich, such as his prior hate group activities:

"He is the founder of the ultra-nationalist group Format18. In 2007, the Russian government actually shut down F18 and arrested Maxim 'on suspicion of inciting hatred' after he shouted 'Sieg heil' and 'kill the liberals' during a political debate."

Posts from his group's social media page (image translation: “We started to forget what gay parades are supposed to look like.”), and the completely expected support of Adolf Hitler…and somewhat surprising disdain for Putin.

"He doesn’t like Putin much. He believes the media has dehumanized him, and the entire nationalist movement for that matter."

Be cautioned that the Vocativ article can be disturbing to read.