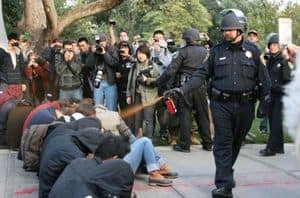 Perhaps you remember the incident at UC Davis on November 18, 2011 where a bunch of students peacefully protesting tuition hikes were pepper sprayed by campus police, homophobic Lt. John Pike in particular. The former Marine and seasoned officer with 17 years in law enforcement is now filing for worker's comp, claiming he suffered psychiatric injury from the incident. While the specifics of his psychiatric injury were not available as of this writing, if approved his disability benefits would cover income, health and other benefits until he turns 65. Pike also retains retirement credit for his years of service as a UCD employee.

Pike's settlement conference is scheduled to be held on August 13th in Sacramento, and Davis attorney Bernie Goldsmith anticipates protests being held outside the courthouse. If no settlement is reached, the case will likely move forward to trial.