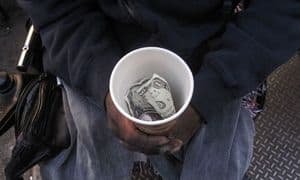 The data comes via a poll released by the Associated Press over the weekend, which points to "the widening gap between rich and poor, and the loss of good-paying manufacturing jobs as reasons for the trend."

The economic indicator, officially dubbed "economic insecurity", defines the criteria as those adults who have experienced unemployment at any point during their careers, spent a year or more relying on government assistance such as food stamps, or having an income at least 150% below the poverty line. According to Huffington Post, "measured across all races, the risk of economic insecurity rises to 79 percent." The study also marked a closing of gaps between whites and nonwhites with regard to poverty rates when compared to census data from the 1970s. It also showed:

"Marriage rates are in decline across all races, and the number of white mother-headed households living in poverty has risen to the level of black ones."

The study also remarks on the creation of "the invisible poor", which is a term used to describe those living in suburbs or rural towns who fall into the category of experiencing "economic insecurity".

"Concentrated in Appalachia in the East, they are numerous in the industrial Midwest and spread across America's heartland, from Missouri, Arkansas and Oklahoma up through the Great Plains." 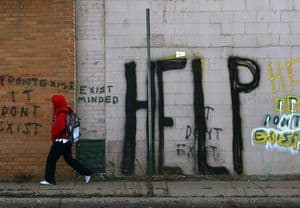 These invisible poor, who, more often than not, tend to be white, are less likely to be targeted by programs seeking to aid other impoverished groups in other, more urban areas. This could be one of the contributing factors to why racial gaps are closing. Mark Rank, a professor at Washington University in St. Louis, told the Huffington Post:

"Poverty is no longer an issue of `them', it's an issue of `us'…Only when poverty is thought of as a mainstream event, rather than a fringe experience that just affects blacks and Hispanics, can we really begin to build broader support for programs that lift people in need."

Other noteworthy findings include:

Thus, while the economy has reportedly finished its recession from late last decade, it does not appear to be growing fast enough to sustain the record 46.2 million people reportedly living in poverty.

Previous Post: « Gay Teen Takes His Own Life, And Is The Fifth One To Do So From His High School
Next Post: Bernice King, Daughter Of Martin Luther King, Jr., Discusses Homosexuality, Says ‘I’m Not The Enemy’ »