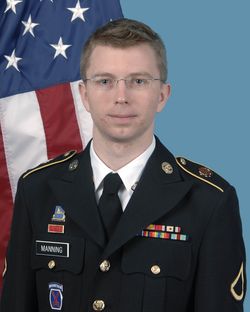 Pfc. Bradley Manning, the soldier responsible for what is considered the largest leak of classified documents in United States history, was found not guilty of "aiding the enemy". Manning already faces up to 20 years for charges to which he has already pled guilty. The charge of "aiding the enemy", which was the most severe of the 21 counts Manning faced today, typically carries with it a life sentence. While Manning managed to avoid the "aiding the enemy charge" today, he has been found guilty of 5 espionage counts and 5 theft counts, one computer fraud count, and other military infractions, making for 19 counts in all. It is not yet clear how severe a penalty those counts carry, although, as was noted by the Huffington Post, Manning's total guilty charges could land him up to more than 100 years in prison.

Manning has been on trial since June 3, and is scheduled to be sentenced tomorrow.

With Edward Snowden and other "whistleblowers" making headlines in recent months, the Manning verdict already brings with it even more debate and controversy with some calling him a "hero" and others a "traitor". Further controversy has erupted over Manning's years in solitary confinement, and his apparent physical condition after the fact. According to his lawyer, David Coombs, Manning repeatedly suffered from inhumane treatment. According to Coombs' blog, he was "forced to stand naked at parade rest where he was in view of multiple guards" and was "required to wear a heavy and restrictive suicide smock which irritated his skin and, on one occasion, almost choked him." He subsequently referred to the punishment as "unlawful". Coombs' revelation only emboldened Manning's supporters, including celebrated whistleblower Daniel Ellsberg, who hailed him as a champion of government transparency. Meanwhile, Manning's detractors, including the Obama administration, had no trouble branding him as a threat to the U.S. and its interest. Then Secretary of State Hillary Clinton stated publicly that the leaks "threatened the lives of Americans and damaged foreign relationships." 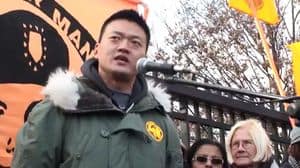 Manning's story also sparked heated debate within the LGBT community, due to the fact that his sexual orientation and struggles with gender identity reportedly played into his motives for the leaks in the first place. Manning served during some of the final months of "Don't Ask, Don't Tell", the controversial military policy that previously barred LGBT soldiers from serving openly. According to Gawker, during many of Manning's correspondences with ex-hacker Adrian Lamo, he confessed to experiencing repeated turmoil over his gender identity. Also, many of the "likes" displayed on Manning's social network profiles were LGBT-related. His defense team attempted to use that fact in his defense, stating that, due to Manning's reported struggle, coupled with the hostile environment of DADT, placed him in a mental state that made him unfit to handle classified documents in the first place. Many of Manning's supporters were also members of the LGBT community, including gay activist Lt. Dan Choi and straight allies such as Rosanne Barr, Russell Brand, and Oliver Stone.

Manning was also briefly appointed grand marshall of the San Francisco Pride Parade earlier this year, a point that was hailed by some and decried by others. Parade organizers opted to change their minds later on, citing a "rogue member of the board" as the source of the original appointment.

Now that Manning's verdict has been released, reactions have started pouring in from various entities. Widney Brown, senior director of international law and policy at Amnesty International, told the Huffington Post that "we're obviously relieved that he wasn't sentenced on the most serious charges when there was no evidence to convict him." Ben Wizner, director of the ACLU's Speech, Privacy and Technology Project, added:

"While we're relieved that Mr. Manning was acquitted of the most dangerous charge, the ACLU has long held the view that leaks to the press in the public interest should not be prosecuted under the Espionage Act. Since Manning already pleaded guilty to charges of leaking information – which carry significant punishment – it seems clear that the government was seeking to intimidate anyone who might consider revealing valuable information in the future."

According to CNN, Manning himself appeared to be relieved upon hearing the verdict, even smiling after he heard the decision.

At least one demonstration has been planned to express solidarity for Manning and his actions later today. The San Diego Coalition to Free Manning has announced today that they will be holding a "RISE UP Rally" at 5 PM " at 6th Ave & University Ave in Hillcrest." Accoding to the group's press release:

"The rally will include banners, chanting, many local speakers, as well as an open mic for the public to share their concerns. 'Manning hoped the revelations would inspire debate and reform. Our aim is to assist our hero in this shared mission,' said Sean Bohac of SAME Alliance. 'We hope that people see that this has not been a fair trial, and that Bradley Manning did a just and heroic thing, organizing these actions helps spark important debate about the failure of the Obama administration to be on the side of freedom and justice.'"

Updates will be posted as the story develops.