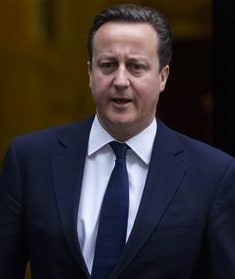 Background of the proposal, courtesy of The Independent:

Mr. Cameron laid out a multi-pronged approach to tackle the proliferation of both legal and illegal pornography on the internet, saying that the problem was "too big to ignore."

While some, such as the Daily Mail's Melanie Phillips have applauded Cameron for acting decisively 'against a presumed liberal consensus and in defense of orderly family values,' others have expressed concerns that Cameron's plan amounts to a war on sex.

Peter Acworth, founder of the UK site kink.com, posted an open letter to Cameron criticizing his actions as "inherently short sighted, unhealthy, and indeed likely to have the opposite of the intended effect."

'You draw the conclusion that consumption of pornography by a handful of sexual offenders actually caused the offense. Let me clue you in. Consumption of pornography is widespread beyond your wildest imagination – the vast majority of it, healthily consumed. You are using a moral compass to make sweeping policy decisions without any real evidence or analysis of the consequences.

Further, if your assessment was correct, it would follow that countries such as Denmark, who prides herself on an absence of censorship of any kind, would have a sexual abuse problem. Far from it. Rape numbers in Norway are one quarter of those in the USA or UK.

Indeed for a country where politicians of all stripes joined together in the legalization of same-sex marriage this year, this new move seems an uncharacteristic limitation of civil liberties. More puzzling still is the question of what will be classified as illegal 'extreme forms of adult pornography,' a notion that Acworth touches on in his letter.

Meanwhile, the logistical concerns of separating pornographic material from educational or scientific information on sex has not been lost on Cameron's mind. Admitting that there would be 'problems down the line' with his proposed system, Cameron seemed unclear of exactly which legal sites or content would be banned by the new filters. From The Independent:

Speaking on the BBC's Jeremy Vine programme, Mr. Cameron said what would be included in the filters would evolve over time. "The companies themselves are going to design what is automatically blocked, but the assumption is they will start with blocking pornographic sites and also perhaps self-harming sites," he said.

"It will depend on how the companies choose how to do it. It doesn't mean, for instance, it will block access to a newspaper like The Sun, it wouldn't block that – but it would block pornography."

Anti-censorship groups have pounced on Cameron's uncertainty, warning that sites about sexual health and sexuality could inadvertently get caught up in the ban.

Padraig Reidy, of the Index on Censorship, said people should not have to opt out of the filters. "If we have, as the Prime Minister is suggesting, an opt-out filter we have a kind of default censorship in place," he said

"Families should be able to choose if they want to opt in to censorship. If a filter is set up as a default then it can really restrict what people can see legitimately. Sites about sexual health, about sexuality and so on, will get caught up in the same filters as pornography. It will really restrict people's experience on the web, including children's."

At the very least, Cameron needs to ensure that LGBT individuals in the country, and especially LGBT youth, have access to internet resources on sexual health and sexuality. To do so otherwise would be an injustice to a community that has considered him a strong ally as of late.

Previous Post: « Has The Gay Rights Movement Forgotten Its ‘Gritty, Dirty’ Sexual Past?
Next Post: Weiner’s Wiener In The Headlines Again »