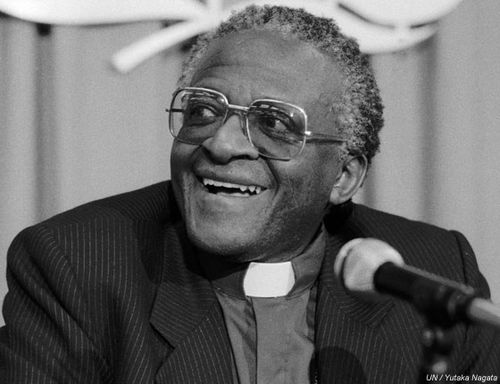 Anglican Archbishop and social rights activist Desmond Tutu made the declaration during the launch of the global public education campaign called "Free & Equal," which we told you about yesterday.

The BBC reports on his stance on equality:

"I would refuse to go to a homophobic heaven. No, I would say sorry, I mean I would much rather go to the other place," Archbishop Tutu said at the launch of the Free and Equal campaign in Cape Town. "I would not worship a God who is homophobic and that is how deeply I feel about this."

Archbishop Tutu said the campaign against homophobia was similar to the campaign waged against racism in South Africa. "I am as passionate about this campaign as I ever was about apartheid. For me, it is at the same level," he added.

Watch a South African Broadcast News segment about Tutu's support of the "Free & Equal" objective, in which he adds that "we should become a society where people are free to be who God made them to be," AFTER THE JUMP.