Back in 2007, NBA point guard Tim Hardaway told a radio host that he hated gay people and even proudly declared himself "homophobic." Six years have since passed and in a newly published featured piece longtime sports columnist Monte Poole highlights how the now retired player has gone from homophobe to advocate for LGBT youth.

Hardaway claims he doesn't want recognition for his newfound work: 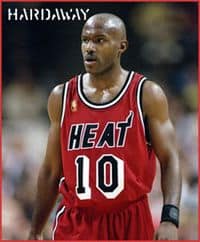 He regrets the words he uttered six years ago and has since taken action. He attended classes at Miami's YES Institute, which seeks to create a healthy sexual and gender environment for youth. He assists the fundraising efforts of several groups, including the Trevor Project, a national organization providing crisis intervention and suicide prevention services to lesbian, gay, bisexual, transgender and questioning youth

And when Equal Marriage Florida in June launched a petition to amend the definition of marriage as described in the state constitution, Hardaway stepped forward as the first person to offer his signature. Hardaway, 46, said he wants nothing in return for his support. No political points. No publicity. No hugs or handshakes. He said he was comfortable discussing the issue because he has known me since 1989, when he was drafted by the Warriors. "I don't do this for publicity; I normally turn down interviews about this,'' he said. "But I know you. That's why I'm talking to you about it. I do this because I want to do it. I don't tell people that I'm going to talk to people about gay rights.

He talks about the guilt he faced after realizing how his anti-gay remarks affected the LGBT community:

"With what I said, people could think it's OK to throw rocks at them or bully them,'' Hardaway said. "I just wanted to make people understand that what I said wasn't cool. I wanted to make amends for it.' Whereas Hardaway's radio comments were the result of being, in a sense, back on the court, where he was utterly fearless and often led with considerable swagger and ego. He was being macho, responding as macho guys are "expected'' to respond. He now responds from an informed point of view.

Hardway's come a long way since he first made those anti-gay remarks six years ago. The full piece is well worth a read.

Previous Post: « Desmond Tutu: ‘I Would Refuse To Go To A Homophobic Heaven’
Next Post: Towleroad Interview: Zdravko Cimbaljevic, Organizer Of The Very First Pride Parade In Montenegro »