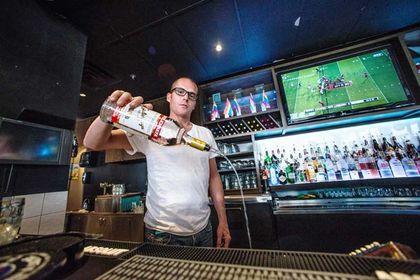 Prompted by Dan Savage's recent op-ed urging people to boycott Russian vodka, gay bars in the United States and elsewhere around the world have started banning Stolichnaya and other Russian vodkas. The goal of the boycott is to bring attention to the recent LGBT human rights violations in that country.

So far, bars in NYC, LA, Miami, Vancouver, Toronto, London, San Francisco, Seattle, Chicago, San Diego and Sydney have all participated in the ban. In the photo above, the manager of The Fountainhead Pub in Vancouver dumps out a bottle of Russian vodka.

An article in today's LA Times reports on the growing campaign:

West Hollywood bars join a growing number of U.S. gay bars boycotting Stoli. Numerous Chicago bars have boycotted the vodka and other Russian products, according to the Windy City Times, a Chicago newspaper that focuses on the gay and lesbian community.

“Consumer action, for a long time, has been a part of any activism,” Art Johnston, the co-owner of the gay bar Sidetrack Chicago, said in an interview with the Los Angeles Times.

Sidetrack–in Chicago’s Boystown neighborhood, an LGBT hub–stopped selling Stoli earlier this week, Johnston said. The spaces on the bar where Stoli vodka bottles would sit remain empty so people will ask what used to be there, he said.

“I’m hopeful people will talk about this,” Johnston said. “Either the lives of gay and lesbian people in Russia mean something, or they don’t. Clearly, to us, they mean something.”

In case you missed it yesterday, the parent company of Stolichnaya, the SPI Group, responded to the ban via an open letter.

Sidetrack was one of the first gay bars to ban the sale of Russian vodka. They stopped selling it this past Wednesday. Watch a WGN-TV news segment about that bar and the boycott, AFTER THE JUMP.