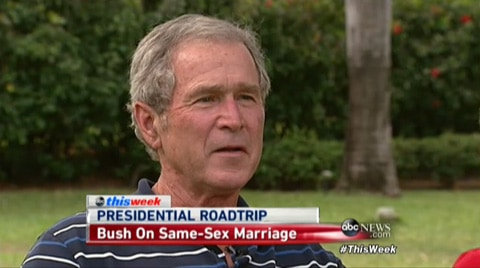 President George W. Bush refused to comment on whether he supports same-sex marriage in an interview with reporter Jonathan Karl over the weekend. The questioning was inspired by remarks he made in Zambia last week, ABC News reports:

Bush had waded into the revitalized same-sex marriage debate last week – if only barely – in a comment to a reporter in Zambia, who asked whether gay marriage conflicts with Christian values.

“I shouldn’t be taking a speck out of someone else’s eye when I have a log in my own,” Bush said last week.

“I meant it’s very important for people not to be overly critical of someone else until you’ve examined your own heart,” Bush told Karl.

As president, Bush opposed gay marriage, and Republicans pushed ballot measures to ban it at the state level.

Previous Post: « Robert Mugabe Threatens Gay Couples: ‘Conceive Or Go To Jail’
Next Post: Pat Robertson Wishes There Was a ‘Vomit’ Button on Facebook for Photos of Gay Couples: VIDEO »