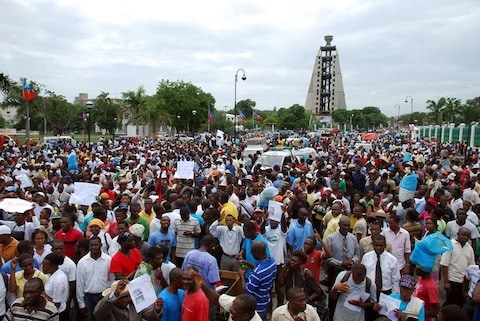 Over 1,000 people in Haiti took their anti-gay animus to the streets to protest the proposed legalization of gay marriage, and some members of the protest even threatened to burn down parliament if gay marriage were to become legal. The protest was religious in nature, organized by groups like the Haitian Coalition of Religious and Moral Organizations, and resulted in the murders of two men presumed to be gay by the mob.

Q: If gay people continue to exercise their rights what are we going to do?

A: We'll kill them, we'll destroy them because we don't need that in our country.We don't want the question of gay people/homosexuals we want a man and a woman. Gay people will curse our country and we already have curses.

Previous Post: « Steve Grand Sets The Record Straight On His Image, His Past, And The Road Ahead
Next Post: Harvey Fierstein Says That “Putin Has Declared War on Homosexuals” »