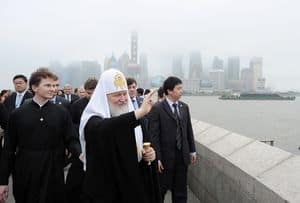 Anyone currently keeping an eye on the news is likely familiar with the fiercely hostile climate faced by LGBT people living in or visiting Russia. While the country's newly-adopted anti-gay laws are likely the main culprit, recent comments made by The Patriarch of Moscow and All Russia Kirill and released by RT illustrate how the Russian Orthodox Church is adding fuel to the fire.

Kirill decried recent LGBT rights advancements in countries such as The United States, France, and The United Kingdom, and urged his followers to resist attempts to enact similar measures in Russia:

“This is a very dangerous apocalyptic symptom, and we must do everything in our powers to ensure that sin is never sanctioned in Russia by state law, because that would mean that the nation has embarked on a path of self-destruction.”

The Russian patriarch also went on to elaborate that, in countries that champion LGBT rights, freedom of choice is seen as the only value worth protecting, even when a person makes a choice that is supposedly immoral and/or detrimental to the fabric of society. “Where sin is elected through freedom, there comes death, terror and dictatorship,” he added. He then asked for his followers to pray for their country, and protect it from “the slavery of sin” that would cause “self-destruction of the nation”.

Those famiiar with the Russian Orthodox Church would likely find these comments to be routine, since the church has already been associated with anti-gay protests and attacks in the past. That said, given the controversies surrounding recent human rights violations in Russia, the Patriarch's comments do shed some light as to the source of this country's vehement and intense homophobia.