Homeland Security Secretary Janet Napolitano is resigning to become the President of the University of California system, the L.A. Times reports: 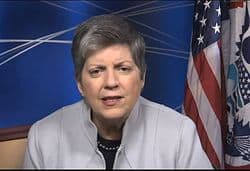 Her appointment also means the 10-campus system will be headed by a woman for the first time in its 145-year history.

Napolitano’s nomination by a committee of UC regents came after a secretive process that insiders said focused on her early as a high-profile, although untraditional, candidate who has led large public agencies and shown a strong interest in improving education.

UC officials believe that her Cabinet experiences –- which include helping to lead responses to hurricanes and tornadoes and overseeing some anti-terrorism measures — will help UC administer its federal energy and nuclear weapons labs and aid its federally funded research in medicine and other areas.